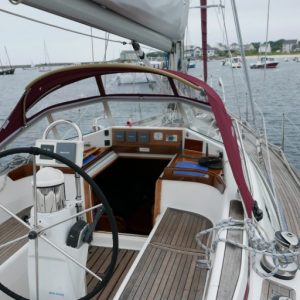 The minutes of the 2017 AGM were distributed. Captain Brian Barnes sought agreement they represented a true record. Acceptance of the minutes was formally Proposed by Peter Wakeling and Seconded by John Wilson.

The Captain welcomed the visitors from the South Coast and Jean who is stepping down as Crew Secretary.

Freyja was in Holland this year and went from the Freisian Islands of Vlieland and Terschelling in the North, covering a great many ports in the Ijslemeer down to Hoorn in the Markemeermto the South. While the weather was in the 30,s in the UK, the daytime temperatures in Holland were similar to nighttime at home. Enkhuizen proved a good handover port despite a trek from the station to the marina. There were a couple of hiccups, none to serious, which Yacht Husband will cover. Within the club we had the sad news that our Treasurer Tom McHale, after standing down due to ill health, died in August. Tom was a real gentleman and I was pleased to have known him. John Figgures took over the Treasurers role in the spring and Mary Gandy has kindly stepped in as Independent Examiner but as yet has had little involvement, as the financial year doesn’t end till 31 December. John Holland stepped down as Webmaster and is supporting Tony Lewis who has kindly volunteered to take on this important work. Jean is not going to continue as Crew Secretary but we are pleased to welcome and formally accept James Allen’s nomination for this role. David Bedborough is relinquishing the role of Yacht Secretary and we welcome the nomination of Andrew Lewis.  David will continue to keep an eye on the charts required each year. We retain a vacant post for an additional member of the committee.

You will recall the accounting change to the 31st December to align with CSSC and CSSA. Tom McHale had produced the report from 1 November 2016 to 31 December 2017, which was circulated.  The Independent inspection confirmed the accounts to be sound and correct. Acceptance of the accounts to 31 Dec 2017 was proposed by Peter Burry and seconded by John Wilson. The current Treasurer also circulated the draft accounts for the period 1 January 2018 to 15 November 2018.  Cash in the bank at the end of last year was £46.8K and the current figure is £63K. This year we took slightly less from charters and similarly with course fees due to low take up on 2 courses. Otherwise the position is much the same as last year e.g. temporary members. We received a £100 bonus from HSBC. In terms of expenditure Berthing fees for 2018 were paid during 2017, berthing charges for 2019, approx £4100, will be paid during December 2018. Maintenance costs were lower than last year when Freyja had the major refit. The major expenditure this year was for the replacement windscreen and a deposit for replacement sails. We could expect a surplus of income over expenditure of £12k. The Captain noted the extension to linked membership to six members for each linked member. At this point in time the committee has not decided on any change to Charter fees as the delivery trip impacts on the situation.  There was no need approve the Accounts to 31 December 2018.

Freyja enjoyed a good season in Holland. All upgrades worked well and reports suggest skippers enjoyed using the new plotters and electronics. The windscreen failed at the end of last year and was lucky we managed to locate the original manufacturer in time to get a replacement for the start of the season. The sails are now 9 years old with batten pockets in a poor state. The committee has decided to replace the sails for the 2019 season and an order has been placed with Dolphin Sails. Freyja will be lifted out in the first week of December and we need volunteers to help with the work needed for the Winter Maintenance programme. A list of jobs has been published in the Newsletter. The same list is on Freyja so jobs can be ticked off when completed. I would like to thank the Team Leaders and I will put their dates on the website so you can choose when to come down and support.  In response to a question Freyja is now 13 years old being taken into service in April 2005 with some £40K spent on Refurbishment including new plotter and electronics over winter 2016/17.

There were no motions received or tabled.

Mary Gandy was nominated and duly elected. Proposed by John Figgures and Seconded by Tom Tooley.

The following Nominations were circulated.

There were no resolutions or motions from members.

ECYD normally have two awards, the Ian Lummas award for someone with a love of the sport and giving a major contribution to the club and the Best Novice Award for someone who is new to sailing and ECYD. There were no obvious candidates this year so no awards were made.

The Captain felt there was a positive reaction about the move to Littleton Sailing Club. In response to a question about Freyja’s current value the Yacht Husband responded with a figure of some £120K. The part exchange figure as seen, was also £120K.

The date for the next years planning meeting and AGM is Saturday 16th November with the Speaker we enjoyed in 2017. There was a suggestion to provide a microphone for next year

To close John Figures made an informal presentation to Jean Rehill for her immense and valued contribution to ECYD over the last 30 years.

There was no other business and the meeting was declared closed

The minutes of the 2019 AGM were distributed. Captain Brian Barnes sought agreement they represented a true record. Acceptance of the minutes was formally proposed by Paul Davies and Seconded by John Wilson.

The Long trip programe was finally put together and we did get Freyja to La Rochelle and back via Brest, Falmouth, Solent and home to Shotley. Most of our plan surrounding 2020 in the Baltic has already been presented by Andrew. With no RYA training skipper the sea school is in suspension but plans are afoot within CSSA to tackle the need for Instructors. We will continue to offer non certificated training such as taster days and boat handling before and after the long trip and explore other areas for next year e.g. sail trimming, night passage or with passage planning included, so please let us know what you are looking for. This year we held a strategy meeting in the summer to consider the plan for 2020 and recruit new members.  The decision to go the Baltic from May and returning at the start of October will require a North Sea crossing to

get Freyja into Holland followed by a further trip  along the North German coast, through the Kiel Canal and into the Baltic and of course return trip. As we said earlier please get in touch with Andrew or James.

The 2018 accounts have already been independently inspected by Mary Gandy who was thanked for her patience and thoroughness to check and confirm that the money received and spent has been properly recorded. The 2018 accounts approved by the ECYD Committee were presented on blue paper and circulated at the AGM. It is usual practice to show the accounts for comparison. I had a closer look at the 2017 accounts as I had had a problem with some aspects not making financial sense to me. I sought advice from the CSSA Treasurer Brian Grubb and Brian Barnes, an accountant in his previous occupation. Consequently I have reworked the 2017 accounts and these have been approved by the ECYD Committee. The white sheet circulated showed the current assets and expenditure to date for 2019. Formal approval of the accounts was proposed by David Crofts and seconded by John Miller.

We had a successful year in France without any major problems. However a number of items are more than 3 years old and need to be replaced to eliminate risk of failure. These include batteries, reefing lines and halyards. The new sails are performing well and going back to Dolphin for checking and laundering.

At the end of the summer cruise there was a large awful looking oil spill  on the foredeck which would have considerably reduced the value of the boat had it not been for Paul Sinclair and Clive Pelerin who went to Shotley and spent 2 days on their hands and knees cleaning and wonderfully restoring the deck and coach roof, illustrated with photos. We must not use teak oil in future. Freyja is now in Fox’s for two weeks of maintenance including complete replacement of the toilet pipe work.  She will be lifted out at Shotley first week of December when we will be looking for helpers to tackle the various winter jobs on the list. We now have introduced a list of volunteers which will be distributed so that helpers could team up to make a party, recognising that some prefer midweek rather than Sundays. So please let Vic know if you are able to help and take a list and return by email to Vic. Three Days will be offered for Skipper Familiarisation. There may be slots after the charter skippers, so email Crew Secretary James Allen noting only 4 berths available overnight.

Mary Gandy was happy to continue and duly elected. Proposed by John Figgures and Seconded by David Crofts.

The following Nominations were circulated.

We have a vacancy as John Garside is hanging up his pen and stepping aside from his role of chasing input and the excellent production of ECYD News. We would be pleased to hear from any member interested to find out more.

In response to the Captains request existing committee members were approved nem com.

Richard Maxwell asked about the Raymarine problems with loss of speed over the ground data. Information was provided regarding contact with Raymarine product support re their being different software versions between the various displays. The update can be done when Freyja is at Fox’s. Peter Wakeling asked how long we were going to keep Freyja. The Captain replied that money has been set aside and not used this year, but situation will be reviewed next year. Paul Brereton asked if Freyja could be in the Eastern Baltic for 2021 and consider Gibraltar for 2022. The Captain said that we have explored the options for the Mediterranean but it could take a year to get Freyja there, or the other options of the canals or by lorry. There are also questions regarding any permissions needed, insurance and Freyja,s suitability in high summer temperatures. The Treasurer noted that post Brexit if Freyja was in EU waters for over 90 days she might be regarded as imported.

There was no other business and the meeting was declared closed